END_OF_DOCUMENT_TOKEN_TO_BE_REPLACED

Today marks one month since the 2018 Legislative Session convened. This week also marked the last week for bill introductions, with a few exceptions. Committees continued holding hearings and passing bills out of committee, including one I co-sponsored with Senate Majority Leader Jim Denning that prohibits the privatization of operations of correctional facilities.

Governor Colyer delivered his version of the State of the State on Wednesday afternoon, almost a month after Brownback delivered his own message. Many say this change in leadership is the beginning of a new era. The reality is, it’s a new governor with the same thinking. Colyer loyally and silently stood by Brownback as their reckless economic policies destroyed our state.

The Kansas Legislature must continue to pursue the path we began in 2017 with a spirit of inclusion and bipartisanship to fully move our state beyond Brownback/Colyer. Our state will prosper when we invest in the people of Kansas and our shared priorities.

It is truly an honor to serve you. If you have any questions, feel free to contact me at 785-296-3245 or by email at Anthony.Hensley@senate.ks.gov. Or, stop by my legislative office located in room 318-E of the Statehouse. I also encourage you to follow me on Facebook.com/SenatorAnthonyHensley.

Thank you, again, for your continued support.

Gov. Jeff Colyer delivered his own version of the State of the State message Wednesday to a joint session of the Kansas House and Senate. His speech made it clear that one of his main objectives is to distance himself from Sam Brownback as much as possible.

In his speech he highlighted the executive order he signed that requires annual sexual harassment training of all executive branch personnel. He also announced four additional executive orders that aim to increase transparency in state government. They include:

Transparency has been a hot topic this session after the Kansas City Star published a series discussing the secrecy in Kansas government. Earlier this session, Democrats announced a host of bills they’ve introduced to address issues discussed in the Star’s series.

Colyer also discussed the need to stop the raids on the highway fund, to meet obligations with KPERS, and to finally put an end to the ongoing school finance litigation. However, he outlined no specific policies for how to achieve these goals.

While Kansans want these shared priorities funded, it can’t be forgotten Colyer has loyally stood by over the past seven years while economic policies wrecked our state. He is only concerned with winning the primary in August. 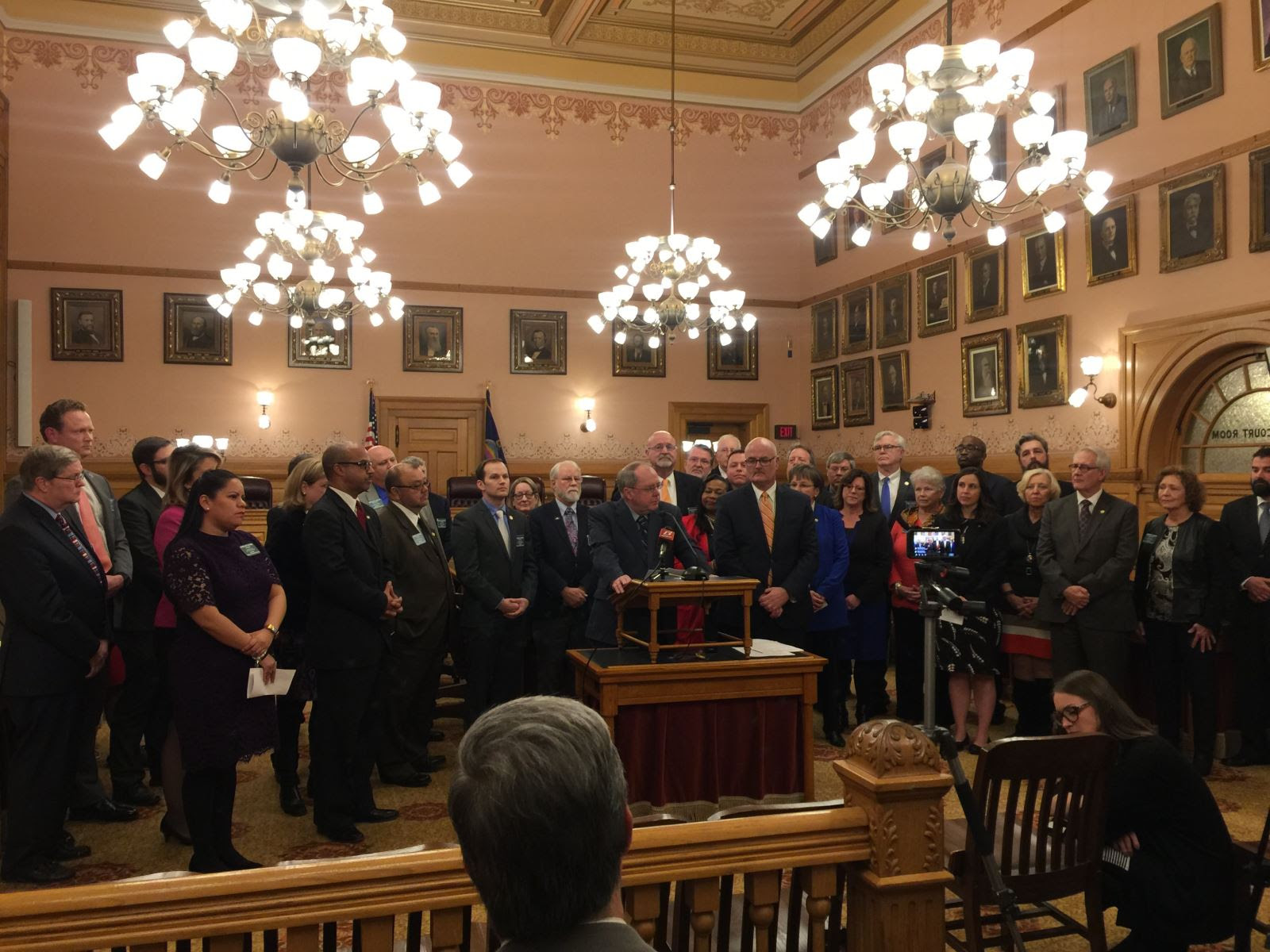 As is tradition, the minority party outlined their own legislative priorities during an official response to the first State of the State. These priorities remain unchanged even with the new governor.

It took a strong bipartisan coalition in the 2017 Legislature to begin restoring fiscal stability; it will take that, again, this year to continue progress.

Democrats remain committed to finding bipartisan solutions that embrace our shared priorities, such as:

We also remain committed to being fiscally responsible and making sure everyone pays their fair share. Our state will prosper when we invest in the people of Kansas.

Legislative leaders on the State Finance Council approved last week a controversial 20-year, $362 million project with prison management company CoreCivic to build a new Lansing Correctional Facility. I did not support the agreement.

While Lansing Correctional Facility is 150 years-old and does need updating, the process by which the proposal came about is concerning. While this vote did not actually privatize the prison, I believe it was certainly the first step towards privatization. As a result, I co-sponsored Senate Bill 328 with Senate Majority Leader Jim Denning (R-Overland Park), which ensures management of our correctional facilities remains with the Kansas Department of Corrections.

This bill had a hearing this week. Sen. Denning and I offered testimony in support of the bill along with an amendment that allows services such as laundry and food to be outsourced. The committee supported the amended bill out and it now heads to the Senate for full consideration.

Senate President Susan Wagle (R-Wichita) and I introduced a bill this week that requires lobbyist registration to anyone attempting to influence an executive or judicial branch employee.

This bill addresses a serious flaw in our current law where individuals can lobby the executive branch without having to register as lobbyists. Taxpayers deserve to know who is involved and what role they’ve played in influencing action within each branch of state government. This is an opportunity to increase transparency and to make government work better for the people of Kansas.

The Kansas Department of Revenue announced last week that January revenue came in $165 million above estimates. This month marks the eighth consecutive month that revenues have exceeded estimates and puts the state up $249 million for the fiscal year. This is good news!

Federal tax changes contributed to this influx as more individuals paid state and local taxes before the end of 2017. However, the changes made at the state level by the 2017 Legislature have contributed to the stabilizing of the budget. There is still a long road of recovery ahead of us, but for now we can breathe just a little easier knowing our bipartisan, collaborative efforts have made great progress towards restoring fiscal sanity in the state.

The Senate Committee on Assessment and Taxation last week held a hearing on SCR 1604, which is a constitutional amendment that phases down the sales tax food rate to 2%, without factoring the local sales tax rate. The current rate, without local rates, is 6.5%. (Read more here.)

Since this is a constitutional amendment, it would require two-thirds majority vote from the House and the Senate. Then, it would be placed on a ballot for public vote.

Over the years Kansas Democrats have consistently demonstrated our commitment to transparency by holding open caucuses, cooperating with open record requests, signing the Open Kansas Transparency Pledge, and introducing and supporting bills that require state government to be more open and accessible. This year is no different.

Members of the House and Senate Democratic caucuses last week rolled out more than a dozen bills seeking to address this issue. Proposals include:

As of 3 p.m. Wednesday, Kansas has a new governor and Sam Brownback has a new title. Lieutenant Governor Jeff Colyer has become Governor Colyer while Sam Brownback heads to Washington D.C. to serve as the Ambassador at Large for International Religious Freedom.

When he first became governor, Sam Brownback told Republican legislative leaders that he wanted to go down in history as the best Governor our state has ever seen, but here is what the Brownback/Colyer administration has accomplished:

With accomplishments like these, Sam Brownback will go down in history as the worst Governor our state has ever seen.  All the while Jeff Colyer loyally and silently stood by.

With Brownback gone, some say this is the beginning of a new era. The reality is, it’s a new governor with the same thinking.

“We all know that Kansas works best when we work together,” said House Democratic Leader Jim Ward. “But the progress we made last year is at risk.  There is a danger of the legislature falling back into the traditional partisanship that originally got us into this mess. I am looking forward to maintaining and building upon on our successful bipartisan coalition to address the challenges facing Kansas.”

Democrats understand there is still much more work to be done, and are ready to get to work addressing the needs of Kansans. Their first priority is fully funding public schools to ensure all Kansas children, regardless of where they live, have access to a quality education that prepares them for a future of opportunities.

“This past fall, the Kansas Supreme Court ruled for the twelfth time since 2003 that the Republican legislature has failed its constitutional duty to provide suitable funding for K-12 schools,” said Senate Democratic Leader Anthony Hensley. “This came as no surprise as the level of funding in Senate Bill 19 four years from now would still be below where we were ten years ago. It’s time to do what Kansans want us to do: put politics aside and pass a school finance law that is adequate and equitable so as to end the school finance litigation we have endured for entirely too long.”

A series recently published by The Kansas City Star brought necessary attention to the secrecy surrounding Kansas government. However, what the series does not mention is that over the years, Kansas Senate Democrats have consistently demonstrated our commitment by holding open caucus meetings, cooperating with open record requests, signing the Open Kansas Transparency Pledge, and introducing and supporting bills that seek to make state government more open and accessible. These bills include, but are not limited to:

While many of the bills mentioned above have finally passed after years of perseverance, there are just as many introduced that have never received committee hearings and are often ignored.

Bi-partisan cooperation brought great success in the 2017 Legislative Session. With that same cooperation, we have the opportunity to make our government work better for the people of Kansas. Kansas Senate Democrats are ready.